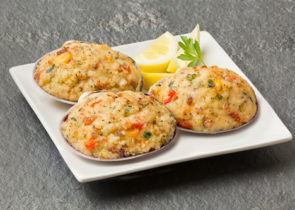 The origin of Carrington Foods, Inc. is steeped in a rich history of family traditions. Down in South Alabama on the eastern shore of Mobile Bay, a peculiar and unpredictable phenomenon, known nowhere else in the Western Hemisphere occurs, the Jubilee. The phenomenon produces conditions which cause thousands of fish, crab, and shrimp and other marine inhabitants to move into shallow water. The Bay creatures then lie dazed on the shore line while lucky residents “harvest” the bounty.

Growing up on Mobile Bay appears to have destined David Carrington Sr., now Chairman of Carrington Foods, for a career in the food industry. That career actually began one summer day following a particularly large jubilee harvest. In the Carrington family kitchen, David and his wife Sally, using crabmeat from the blue crabs, began experimenting with a family recipe for seafood stuffing. After some “Miss Sally” alterations and the perfecting of the delicate hand stuffing of the cleaned crab shells, Carrington Foods and Miss Sally’s Stuffed Crabs commenced production in 1971. 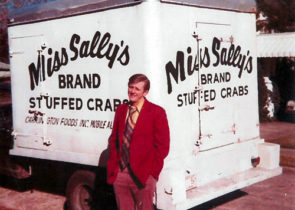 The Company has come a long way from its origins as today its operates a 50,000 sq. ft. facility and an expanded product line that now includes non-seafood products such as cornbread stuffing, casserole sides, and stuffed jalapeno peppers. However, one thing has not changed – quality at an affordable price is the Company’s top priority. Today, David Carrington Sr. and his three sons, David Jr., B. and Freddie are committed to providing outstanding food at an affordable price. Symbols of their commitment to quality, Carrington Foods has achieved some of the highest food safety ratings, like SQF Level 2, while enjoying steady growth throughout the years and evolving into one of the largest value-added seafood companies in the U.S. That growth has enabled Carrington Foods to produce a catalog that encompasses over 1,000 value added items, including product lines with simplified ingredients to provide a more wholesome eating experience.

For more information about Carrington Foods, Inc., you can also visit www.carringtonfoods.com